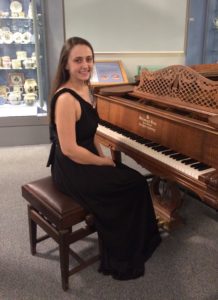 On Tuesday, April 17th Romanian-born Alexandra Vaduva gave a piano recital in the Pottery Room at Sunderland Museum. This was well attended by an enthusiastic audience who could not fail to be impressed by her brilliant but very musical performance which covered a wide range of varied music.

The evening began with the Sonata in A minor, D537 by Schubert, well played in great style. The subtle use of pedal in the second movement managed to keep a legato tune whilst keeping the staccato bass. We then heard two Scarlatti Sonatas, E major, K380 and D minor, K9 again very well played. The music then moved to a more modern age of George Enescu (1881-1955) with two pieces from his Suite no.3 which were most pleasant and well contrasted. After the interval there was a beautiful performance of three Intermezzi, Op. 117 by Brahms then we returned to Enescu to hear the Suite for Piano no.1 in G minor op. 3. This is a four movement suite, well contrasted and needing a strong technique as well as musicianship. This work, as with the earlier Enescu, was performed with great authority and power and the Society should feel privileged to be presenting a First Performance [in Sunderland] of such good works.

The audience was most impressed with the entire evening and it was gratifying to see how well the Enescu was received. After such a rousing end to the evening Alexandra gave us an encore of Schumann’s “Träumerei”.

Alexandra Vaduva was sponsored by The Countess of Munster Trust who help young talented artists at the beginning of their career and we certainly hope that we shall hear more of her in the future.