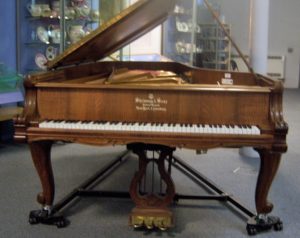 An audience of around fifty took in this special event, when Murray McLachlan, Head of Keyboard Studies at Chethams, Manchester, played a selection of pieces from the 2019-20 Piano Syllabus. As he was also a co -author of the Teacher Notes on these pieces produced by the ABRSM, and a prominent solo pianist in his own right, the evening was greatly anticipated. The audience were not disappointed, as he endeavoured to play and comment upon a vast selection from all the grades.

The first half consisted of the early grades. With Murray’s first-hand knowledge as a previous examiner, he was able to give us an insight into what an examiner was looking for (style and character), and many of the pieces, despite their simplicity, came across as beautiful and charming in their own right.  It was almost an impossible task to play all of the 48 programmed pieces in their entirety, and we had to be content to listen to extracts from some of the pieces in the later grades. However, his friendly style of delivery, and his insistence on the pieces being alive with characterisation and expression, rather than military precision, more than made up for this. He still managed to finish with the full version of Gershwin’s Prelude No 1 from Three Preludes. with aplomb.

Audience numbers were a little disappointing in that despite widespread publicity among senior schools in the area, there were not more pupils and their families attending, who may also have been interested in some of our future recitals. It is to be hoped that word will get around, ‘What a cracking evening you have missed’