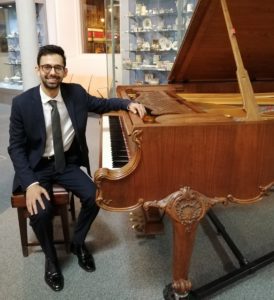 On Tuesday, 22nd October Sunderland Pianoforte Society continued its 77th season with a recital given by Alexander Soares who played works by Bach, Beethoven, Albéniz and Messiaën. This was attended by an appreciative audience who enjoyed the Bach English Suite in G minor which opened the recital. The first half continued with El Puerto and El Albaicin by Albéniz and Regard de l’Église d’Amour by Messiaën which was a good contrast to the Bach and which was brilliantly played, showing a clear understanding of the music as well as a huge technique. The Messiaën in particular was most impressive. After the interval we heard the well loved Beethoven late sonata op.111 which was followed by an encore, Morceau de Lecture à Vue by Messiaën. Altogether a good evening given by a brilliant young pianist who is assured of a successful career.

Alexander is a graduate from Cambridge and his recent performances include Wigmore Hall, St. Johns Smith Square and the Barbican Centre.