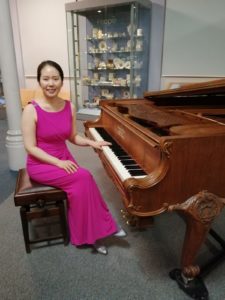 The 77th season of the Sunderland Pianoforte Society continued with a recital given by Korean pianist Grace Yeo in the Pottery room at Sunderland Museum. It was well attended by an enthusiastic audience who enjoyed listening to works by Robert and Clara Schumann, Beethoven, and Scriabin, and were privileged to be present for the first performance of local composer David Pennycuick’s Preludes op.19 [nos. 20, 21, 24 and 6]. These were well contrasted preludes which were well received by the audience and beautifully played by Grace Yeo who had a clear understanding of the works.

The first half of the recital consisted of Robert Schumann’s Arabeske, op.18 and Sonata in G minor, op.11 as well as Clara Schumann’s Romance in A flat and Deuxième Scherzo in C. The second half began with the Pennycuick Preludes which were followed by Sonata op.10 no.3 by Beethoven and the recital finished with a brilliant performance of Scriabin’s Sonata no.4 in F sharp. However the audience wanted more and were given two encores, Liszt’s Gnomenreigen and Schumann’s Träumerei.

Grace Yeo was making her second visit to Sunderland and is an artist of great technical ability as well as a clear understanding of the music and gave the audience a most enjoyable evening.