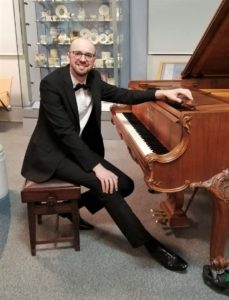 Sunderland Pianoforte Society continued its 77th Season with a recital given by the brilliant young Lithuanian pianist Ugnius Pauliukonis who delighted his audience with a thoughtful and interesting programme. The recital began with a beautiful performance of the Sonata no. 52 in E flat by Haydn which was played with great care and authority. The speed was perfect as was the use of pedal which was minimal. This was followed by a selection of Chopin Nocturnes, Waltzes and Studies which made a good end to the first half. After the interval we heard Images, Book 1 by Debussy and again were impressed by the atmosphere created by Reflets dans L’eau which was followed by Hommage a Rameau and Mouvement which was given a brilliant performance. The evening finished with a moving and beautiful performance of the Sonata no.2 in B flat minor by Chopin, and the audience which had bravely struggled through very bad weather to attend were well rewarded by having such a good evening.

The Society is grateful for the sponsorship and support of Making Music’s Philip and Dorothy Green Award for Young Concert Artists scheme which over the years has been a great help to the Society.