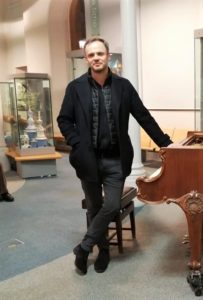 The Sunderland Pianoforte Society continued its 77th season with a recital given by well established British pianist, Ashley Wass. An old friend of the Society who was making a welcome return visit, he gave the audience a wonderful evening performing works by Bach, Schumann and Elgar. As well as winning many competitions Ashley has performed at many of the world’s finest concert halls including the Wigmore Hall, Carnegie Hall and the Vienna Konzerthaus. He made his Proms debute in 2008 and since then has played in many countries.

The evening began with a most impressive performance of the Bach Partita No. 1 in B flat which was played with great authority and contrast and was clearly enjoyed by the audience. This was followed by Kinderszenen by Schumann which was given a beautiful performance and was a good contrast to the Bach. After the interval we heard Elgar’s own transcription of the Enigma Variations, a much loved work which is rarely heard as a piano solo but Ashley Wass managed to make this sound very orchestral, using the piano in a most professional manner and producing very rich sounds. This is a true artist.

The audience were not willing to let Ashley finish and were given an encore of the Arietta, op.12 no.1 by Grieg. Altogether, a very good evening.